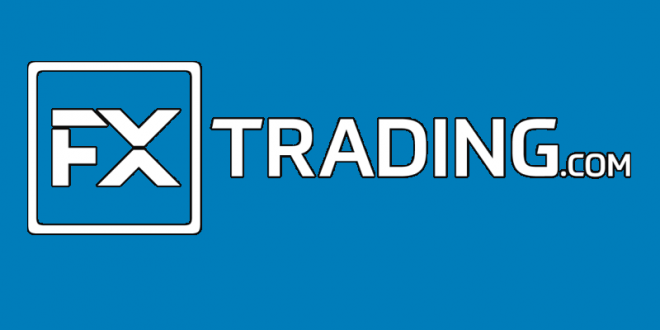 FXTRADING.com is a trading name of Gleneagle Securities Pty Ltd, which is authorized and regulated by the Vanuatu Financial Services Commission (VFSC). FXTRADING.com provides online trading in currency pairs, commodities, and indices through the trendy trading terminal – MetaTrader 4 (MT4). The leverage can be up to 1:400 and you can start trading with as low as USD200.

There are two types of live accounts, which differ mainly in the spread and the minimum required deposit.

Standard account – The minimum deposit amount is USD200, spreads are variable and start from 1 pip for major currency pairs. Trading is commission free.

Pro account – You must invest at least USD1,000 to open the Pro account. Spreads are raw (close to zero) at the expense of a commission of USD3.50 per lot per side (USD7 for a closed transaction).

What Type of Broker the Company Is

The Product Disclosure Statement document shows that FXTRADING.com acts as a principal to clients (not as an agent) and is a market maker. This carries an automatic risk of actual conflict of interest because the company acts as a principal and sets the price of the financial instruments. It does not act as a broker. Being a market maker involves a conflict of interest because when the company executes orders, it keeps the risk to itself. Every loss for customers is a profit for the company.

In addition to all the usual fees, such as spreads and rollovers, the company may charge some other fees. For example, you may be required to pay royalty or similar charges set by data providers for the use of information feeds or for online transaction services.

Deposits can be completed by bank transfer, credit/debit cards or by e-wallets such as Neteller, Skrill, and Poli. The minimum deposit is USD5 for payments made by cards and e-wallets and USD200 for payments made by bank wire. All transaction fees are covered by the company, except for bank wires, where the transaction fee of AUD15 is covered by the client. The money is added to the account instantly, except for bank transfers, which can take up to 5 business days.

Withdrawals can be made in the same ways as deposits – bank transfer, credit/debit cards or by e-wallets such as Neteller, Skrill, and Poli. The minimum amount is USD5 for payments made by cards and e-wallets and USD200 for payments made by bank wire. All transaction fees are covered by the company, except for bank wires, where the transaction fee of AUD15 is covered by the client. Withdrawals are processed within one business day. 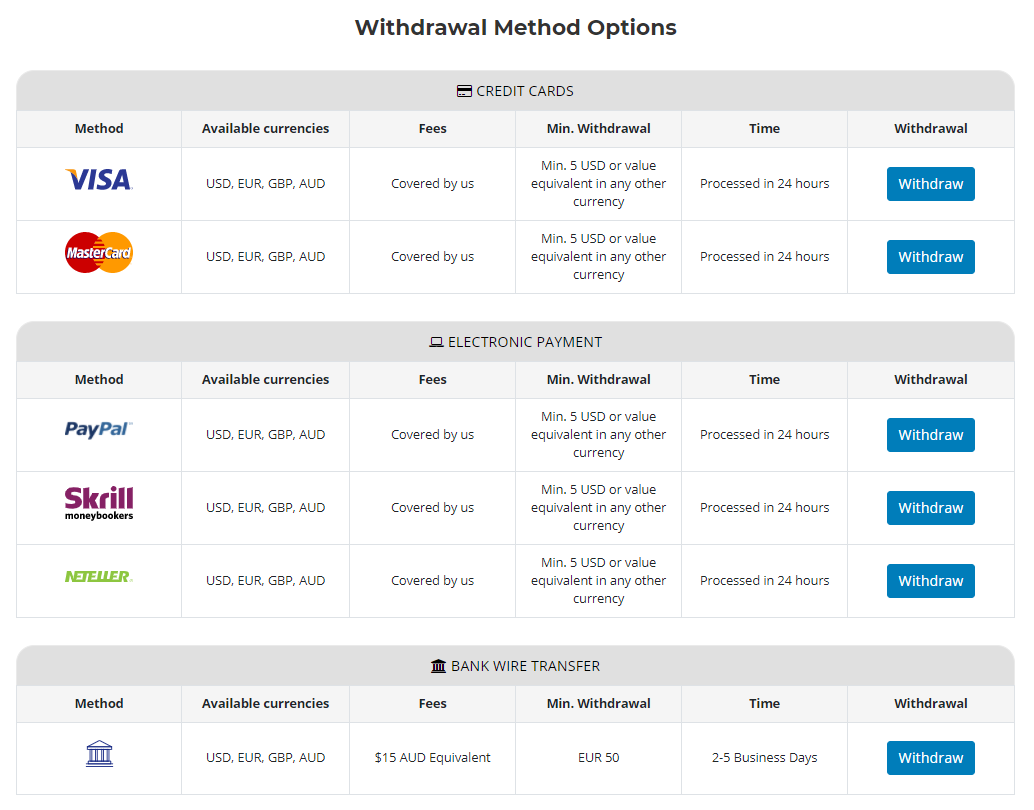 You can trade via the award-winning MetaTrader 4 (MT4) terminal. MT4 guarantees to meet the individual needs of each trader. It combines fast order execution, no dealing desk intervention, an intuitive user interface and plenty of customizable features. MT4 is a suitable and efficient terminal for traders of all levels. The platform is available as a desktop version and as a mobile application for iOS and Android phones and tablets. In addition, there is a web-based version that allows you to trade from any modern browser and operating system without the need to download additional software.

Currency pairs – 45 popular major, minor, and exotic currency pairs can be traded. The spread for the major currency pairs starts at 1 pip in the Standard account and is close to zero in the Pro account. The leverage for forex can be up to 1:400.

Commodities – 4 of the most traded commodities are available – Gold, Silver, Oil and Brent. The average spread for the Gold is USD0.10.

FXTRADING.com uses the newest Equinix data centers in NY4, New York, which allows it to get prices from over 25 top-tier banks and ECN liquidity providers such as (Fastmatch LMAX and Currenex) to provide institutional grade liquidity pools, the company claims. Because of this, the latency is ultra-low and fast execution of orders. There are no restrictions in trading strategies – expert advisors, news trading and scalping are allowed.

FXTRADING.com is a VFSC-regulated company, which acts as a market maker, so the major conflict of interest exists. You can trade currency pairs, commodities, and indices through the MT4 terminal, which can be downloaded for PC or MAC machines and as a mobile app. You can deposit by bank wire, debit/credit cards, and e-wallets. Live trading can be started with as low as USD200. Spreads are variable and the Pro account offers raw spreads at the expense of the commissions. Although the company claims it has an ASIC license, it is part of another group that has the ASIC license. Gleneagle Securities Pty Limited is regulated only by the VFSC.